You only have to pick up a newspaper to know that traffic accidents happen on a daily basis in Singapore.

In Feb 2015, drastic changes were made to the laws governing the use of mobile devices - hand phones, tablets and so on - whilst driving a vehicle. These are some of the most important changes of road traffic legislation in recent memory.

Did you know? You can save $300 or more on your car insurance* with DirectAsia

Did you know? You can save $300 or more on your car insurance* with DirectAsia!

Why Was The Law Changed?

Most Singaporeans – from business owners to first time drivers - will know the temptation to take or make calls while driving. The facts speak for themselves. A recent Samsung-commissioned survey found that 83 per cent of Singaporean drivers admitted to using their mobile phones without a hands-free kit while driving in the last 12 months. The top reason? They felt it was safe to do so.

The same survey found that a clear 93 per cent of drivers — think it is unsafe when they see other people using their mobile phones when driving. In fact, if respondents were passengers in a car where the driver was using his mobile phone, nearly three quarters of them would ask the driver not to do so.

16 per cent of the drivers surveyed had already been in an accident or had a near miss while driving because they were distracted by their mobile phones.

“The use of mobile phones while driving stems from the misconception of the drivers, thinking that they are capable of multi-tasking. This is untrue, as when a person does two tasks, in which both demand a certain amount of attention, multi-tasking is unsafe and impossible. When a driver is behind the wheel, he should concentrate on driving and avoid other distractions to avoid accidents,” Adjunct Associate Professor Gopinath Menon, College of Engineering, Nanyang Technological University

We have the best rates for 0-6 year old cars*. Switch to Singapore's #1 direct car insurer!

We have the best rates for 0-6 year old cars*. Switch to Singapore's #1 direct car insurer!

What Does The Law Mean For Me?

It is an offence to hold and use your mobile devices while you are driving. First-time offenders can be fined up to $1,000 and/or jailed for up to six months. Repeat offenders face up to $2,000 in fines and/or up to 12 months in jail.

It is no longer just talking or texting that will get you in trouble. The new changes include surfing the web, visiting social media platforms like Facebook and Twitter, and downloading material.

What If I Need To Make Or Take A Call In The Car?

Invest in a hands-free device. For example, it is not illegal to use a mobile device that is mounted on a holder or dashboard.

What About Wearable Technology?

The amended law does not specifically mention wearable technology like Google Glass. But the use of such devices could be classified as inconsiderate driving, an offence which carries up to a $1,000 fine and a six-month jail term.

"We will continue to monitor the situation... and study the practices of other jurisdictions as they evolve to deal with (new) types of smart devices." Masagos Zulkifli , Senior Minister of State for Home Affairs, 2014

Get great value car insurance in just 5 minutes. Buying direct you avoid paying brokers' commission of up to 25% on your insurance. Choose the plan you want. Pay the way you want. You are insured!

Things Not To Say To A Car Salesman. New Car Buyer Top Tips.

5 Minute read
According to car salesman Mark McDonald of motortrend.com, one of the biggest complaints people have about buying a new...
Read more 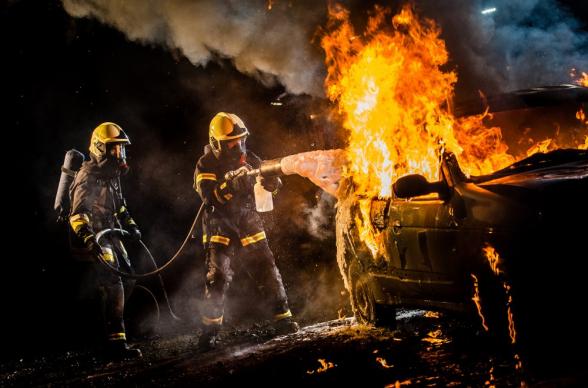 Fire emergency! What to Do if Your Car Catches Fire

5 Minute read
Aaron was driving on the expressway one night when he smelled something burning and saw smoke billowing from his car...
Read more